Apple releases a new and final full release version of Safari web browser for Mac and Windows PC, which it claims is the fastest web browser in the world. Blazing performance has been the main feature of Safari 3.1, which Apple benchmarks its web page loading speed is 1.9 times faster than Internet Explorer 7 (IE7), 1.7 times faster than Firefox 2, 2.8 times faster than Opera 9, while JavaScript execution speed is 6 times faster than other web browsers, when tested with VeriTest iBench 5.0 using default settings running on an iMac 2.4 GHz Intel Core 2 Duo system running Windows XP with 1GB of RAM.

Safari 3.1 also supports the newest and latest Web standards so that users can experience Web 2.0 contents delivery. In fact, Safari 3.1 is the first Internet browser to support HTML 5 <audio> and <video> tags, CSS 3 Web advanced standards such as CSS animations and CSS Web Font, as well as the offline data storage component.

For Windows system, Safari 3.1 only works on Windows XP or Windows Vista with at least 256MB of RAM running on 500Mhz Pentium-class processor or better. Two version of setup installer downloads are available, as listed below together with official direct download links to the setup files. 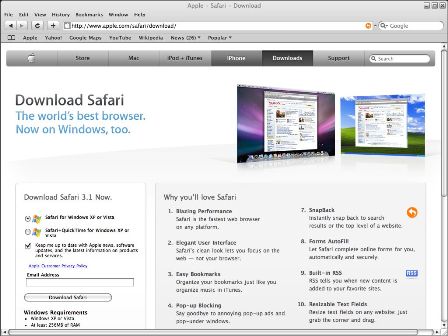