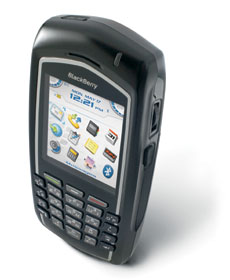 (link dead) reviews Spring BlackBerry 7130e and concludes that while the 7130e is certainly not the most feature-rich phone we’ve ever seen, it’s also not the most expensive – not by a long shot. It’s the BlackBerry for the non-CEOs out there. Overall, there’s nothing glaringly wrong with the phone. It just doesn’t go above and beyond to provide an unbeatable competition against other similarly priced phones.

(link dead) concludes with rating of 3.5 out of 5 that the BlackBerry 7130e, which is available from Sprint for $199.99 with a two-year contract, delivers high-speed EVDO capabilities at a very attractive price. But anyone with intensive text-entry needs should seriously consider buying an EVDO-enabled device that offers an expanded Qwerty-style keypad.