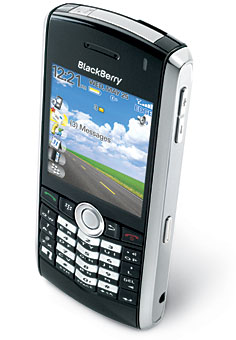 (dead link) reviews BlackBerry Pearl and concludes that “say what you will about the new BlackBerry Pearl, and some undoubtedly will complain of cramped keyboards and other tradeoffs. It’s so very imperfect, as all small devices are, and yet I’d more happily keep using this BlackBerry than its larger siblings or the vast majority of new devices hitting the market every week. More importantly, as even non-corporate types may care more about mobile e-mail than pictures and music, it’s the only BlackBerry that’s light and small enough to sit imperceptibly in a pocket. In fact, this non-flip handset is more compact that even most regular cell phones, including the exalted RAZR from Motorola Inc.

(dead link) concludes that “in short, the business features are strong. The Pearl’s weakness is in the bells and whistles designed to appeal to consumers. This is the first BlackBerry to incorporate either a camera or a media player. The 1.3-megapixel camera compares favorably with those on most high-end handsets. But the kinds of photo-sharing applications showing up on camera phones of all sorts are not available for BlackBerry. The Pearl is clearly an effort by RIM to make the corporate-oriented BlackBerry more attractive to consumers. I suspect, however, that its main appeal will be to folks in traditional BlackBerry markets who are willing to sacrifice ease of typing for a phone that is smaller, cooler, and more versatile. For them, the Pearl should be an easy winner.”

New York Times concludes that the Pearl is a pearl. It’s a beautiful, black-and-chrome, incredibly tiny slab. At 4.2 by 2 by 0.6 inches, it’s much smaller than a Treo, Sidekick or Motorola Q; you’ve eaten candy bars bigger than this phone. This very polished Pearl is all about the sweet spot; for such a wisp of a thing, it’s an awful lot of machine. Considering how many things it does, and how well, you may be amazed to learn that no laws of physics were broken in the making of this phone.

(dead link) concludes that the Pearl is a pearl. It’s a beautiful, black-and-chrome, incredibly tiny slab. At 4.2 inches, or 10.6 centimeters, by 2 inches by 0.6 centimeters, it is much smaller than a Treo, Sidekick or Motorola Q; you’ve eaten candy bars bigger than this phone. The Pearl harbors a few disappointments, but finding them requires digging like an archaeologist. Some have to do with its carrier, T-Mobile, which is not exactly America’s coverage leader. Worse, T-Mobile’s “high-speed” Edge network gets you online at only dial-up speed if you’re lucky. The text of the nytimes.com home page takes 45 seconds to appear; with photos, two minutes.

Tech Digest concludes with rating of 4 out of 5 that the Blackberry Pearl is tempting. Whether it’ll get those elusive consumers emailing on the move I suspect will depend largely on the packages carriers put together – there’s still a fear held by many people that they will somehow end up with an enormous phone bill come the end of the month if they use data services.

(dead link) concludes that the Pearl is not the perfect phone. But the very fact that one can start thinking about it in absolute terms suggests it’s getting close. This is one sexy cellphone, smaller than its competitors and loaded with features that look and feel like they all belong there. The competition had better start worrying.

Phone Scoop reviews the RIM Blackberry Pearl and concludes that the Pearl is a fantastic piece of hardware, and for Blackberry users it is a serious upgrade in size and style over whatever previous models they own. But new users who are into trying out a Blackberry because of the sleek form may want to look at smartphones from other manufacturers if you’re going to do more than read your email and make phone calls. Most modern smartphones have more user friendly software and can run some sort of push email client that would make reading email just as user friendly as the Blackberry.