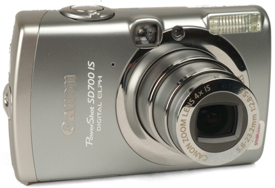 LetsGoDigital reviews Canon Digital IXU 800 IS digital camera and concludes that “we have nothing but praise for the top model from the Digital IXUS series: the Canon Digital IXUS 800 IS. The camera features a user-friendly operation, and produces first-rate image quality. It is not a camera for the photographer with high demands looking for something compact, whilst also wanting to make choices in aperture and shutter speeds, but then again, the Canon IXUS 800 IS does not claim to be this type of camera in the first place. It is an attractive design camera, attaching particular value to quality and ease. And once you have worked with an optical image stabilizer and have experienced the advantages of care-free photography in every imaginable situation, you are not likely to return to a camera that is not equipped with an image stabilization system. We can conclude the Canon Digital IXUS 800 IS is a champion among compact cameras, a camera that truly deserves to be a style icon! An outstanding performance! ”

(dead link) has a first look on Canon PowerShot SD700 IS Digital Elph after having played with it for a couple of days, “I think the SD700 IS is pretty nifty. It combines moderately small size, a great LCD, image stabilization, and awesome build quality. But it’s not cheap. If you’re looking for a digital camera to suit your personal style, the SD700 IS could be the one–if your style includes dressing up and dining at jackets-required restaurants.”

(dead link) reviews Canon Digital IXUS 800 IS and concludes with the very good rating of 7.8 out of 10 on the camera that the Canon Digital IXUS 800 IS is a very strong, compact digital camera that produces great pictures. Its price is a bit high compared to that of its little siblings, the IXUS 60 and IXUS 65, but its great image stabilization and subsequent blur-free photos are worth the extra few quid.

(dead link) reviews Canon PowerShot SD700 IS digital camera and concludes that the Canon PowerShot SD700 IS packs a solid set of components into its sturdy and trendy body. This 6-megapixel digital camera has a 4x optical zoom lens that is lengthier than the average and nicely complemented by an optical image stabilization system. The system has several modes optimized for different purposes like saving battery power and shooting horizontally moving subjects, but all of them work really well, both works when snapping still images and when recording video. While the Canon SD700 also has an optical viewfinder, it is more for decoration than anything else. Its inaccuracy and blurry view is nearly useless, but the 2.5-inch LCD screen is much more inviting to look at anyway, even with a disappointing 173,000-pixel resolution. A 100 percent accurate view and a wide viewing angle that can be seen in bright daylight or the dark of night are definite assets.

However, the Canon PowerShot SD700 does have its quirks: it has a cool Jump feature to navigate large amounts of photos, but no deletion feature to scroll through and select a partial order of pictures to delete. The viewfinder is inaccurate and the handling is complicated by the small size. Perhaps the biggest impediment for the Canon PowerShot SD700 IS is its price. At a time when other manufacturers are offering similar features for $399 or less, the SD700 is being released at a retail price of $499. Sure, it has an awesome image stabilization system and takes excellent pictures but it will sure hurt the pocket book.

(dead link) reviews Canon PowerShot SD700 IS and concludes with rating score of 8.5 out of 10 that Canon’s SD700 IS was enjoyable and easy. In the picture quality area there is nothing to complain about because the SDF630 delivers outstanding photos with vivid color. It’s fast to turn on, power up and recycle time between shots seemed almost instantaneous.

This camera has the Point-and-Shoot photographer written all over it. It’s fast, it’s stylish, and it’s reliable. But it’s not cheap! This camera is NOT for anyone who needs/wants control over aperture and shutter speeds. While the cmaera does have a manual setting is a bit of joke.

Steve’s DigiCams reviews Canon PowerShot SD700IS and concludes that the PowerShot SD700 is another outstanding member of Canon’s Digital ELPH series, offering great image quality, robust performance, and useful exposure modes, all packed in an ultra-compact, durable and stylish shell. It’s sure to make an excellent choice for any user in the market for an extremely pocketable 4x zoom, high resolution digicam. At about US$499 MSRP, it is roughly $100 more expensive than its SD630 sibling, but its combination of 4x optical zoom lens and Image Stabilization will be worth the extra cost to those who need those features.

The Age reviews Canon Ixus 800is digital camera and concludes that Canon Ixus 800is goes to the top of the list of pocketable digicams alongside Sony’s DSC-W100. The Sony has more pixels on a bigger sensor but the Canon wins in the glamor stakes. Both have optical viewfinders. The Canon has image stabilization and costs $100 more. Both are highly recommended.

Digital Camera Review concludes that “with several trade shows to attend each year, a couple of my colleagues ended up with the SD700 IS. They don’t like to carry large cameras, but were getting increasingly disappointed with the images from their older, slim cameras that didn’t do well in low light. With the SD700 IS, they get a camera that can take excellent shots of the latest and greatest electronics in the sometimes challenging light of trade show exhibits. All while still being small enough to easily pocket and not be too noticeable.

The above example is only one of many situations where the SD700 IS feature set will come in handy. It has excellent image quality, good battery life, and very fast operation. While it doesn’t have any true manual modes, the person that buys this camera typically isn’t looking for them. The included feature set, including the fun My Colors feature, is fun to use. While the camera is not cheap, it is worth it if it’s in your budget.”

(dead link) concludes with rating of 4 out of 5 that Canon Digital IXUS 800 IS is a valiant attempt to deliver a good-looking top-end compact that comes with a full complement of useful features. Though the 800 IS is very similar to the IXUS 65, the extra $50 for the 800’s image stabilization feature and lens reach is worth it. It’s not infallible, but comes close.