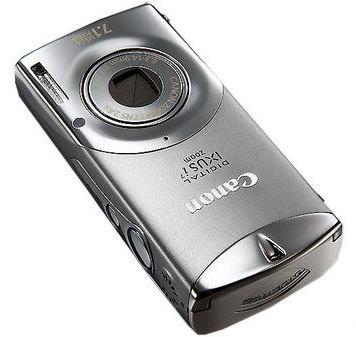 Imaging Resource has an express review on Canon PowerShot SD40 Digital ELPH and concludes that the small and snazzy Canon SD40 is a digital camera that puts as much importance on style as it does on picture taking. And while it wouldn’t look out of place dangling from a wrist on a night out on the town, or on the fashion runway, for that matter this model’s 7 megapixel imaging chip and a host of new features such as Canon’s speedy DIGIC III processor and helpful Face Detection AF/AE technology are designed to produce quality photos. In most basic shooting situations it does just that. Dim the lights and turn off the flash, though, and the SD40 struggles, despite being able to shoot at light sensitivities as high as ISO 1,600. In short, the SD40’s noise issues are its Achilles’ heel, especially considering that stylecams are very often used in low-light settings. Those who want to shoot nightlife with greater quality while maintaining a sense of style would do better with the Canon SD700 IS or SD 800 IS, whose optical image stabilization delivers far greater image quality, and allows you to shoot at lower ISO settings.

Cameras.co.uk reviews Canon IXUS i7 Zoom and concludes with total score of 81% that the Canon IXUS i7 zoom is very difficult to judge. In my opinion the picture quality does not match up to that produced by other more standard Canon digital cameras. If you would like a camera looks different to all the rest and will draw admiring glances from others then this is one of the very few digital cameras capable of achieving that. Nonetheless, Canon IXUS i7 zoom is a truly stylish digital camera. It is one of the few digital cameras to stand out on its own in terms of looks. It is available in four sharp colours. Picture quality is good and it makes a refreshing change to see a camera that stands out from the crowd.