Home»Networking»Check Point VPN-1 Edge W8 Review by PC Pro
Previous Next
Check Point VPN-1 Edge W8 Review by PC Pro
Check Point VPN-1 Edge W8 is a UTM firewall plus VPN security appliance for branch offices and small offices. W8 is a variant of “W” family in Check Point VPN-1 Edge family series of firewalls, which consists of the ‘X’ family, which doesn’t include wireless connectivity, and the ‘W’ family, which does. Edge W8, as its name implied, supports 8 concurrent users and 1 remote access user. The security appliance features IPSec secure wireless connectivity speeds of up to 108 Mbps with Extended Range of up to 3 times that of a standard access point, Firewall/VPN throughput of 80/20 Mbps, hardware VPN client for one user support, 4-port LAN switch, 1 WAN port, 1 DMZ/WAN2 port, 1 serial port and a built-in USB 2.0 print server with two ports. 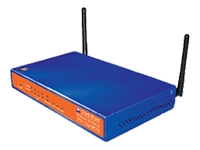 PC Pro reviews Check Point VPN-1 Edge W8 and recommends the W8 with rating of 5 out of 6 and concludes that initial outlay is higher than most SME appliances, but the VPN-1 Edge does offer many security features. Originally launched in 2005, the VPN-1 Edge has taken a while to mature and, as such, is comparatively costly. However, it now offers a comprehensive range of security features in an easily managed package.