Although there is the limitation of one file type or ext can only be associated and thus rendered by one previewer engine only, however, each preview handlers can be used to support multiple file types and extensions. In this case, Preview Handler Association Editor will come in handy to allow users to associate a particular preview handler with a or a few file types with different extensions so that those would be previewable, where they’re not by default.

Previously, to expand the file types that a previewer can handle involved registry hack and tweak, or support provided by third-party preview handlers.

Preview Handler Association Editor is a tool that makes it easy to edit preview handler registrations for particular extensions. It’s useful too to handle the restriction mentioned above where only one previewer is allowed for each extension. When you have two ore more different preview handlers for a file type, the Preview Handler Association Editor also allows you to easily switch back and forth between them with relative ease. 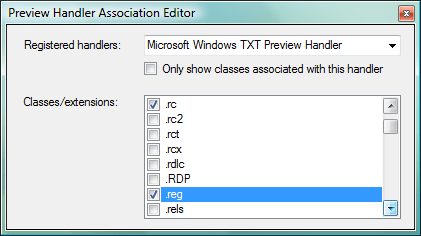