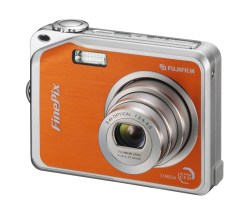 LetsGoDigital reviews Fujifilm FinePix V10 digital camera and concludes that the Fuji FinePix V10 leaves very little to be desired. It is simply a pleasant and user-friendly camera to work with, one that attaches particular value to ease and convenience, whilst producing fantastic images. What more could you possibly want? Fujifilm are quick to answer this question for you, and have added several games as an extra asset. Perhaps not the most important feature of a camera, but without question a fun addition. Once again, Fujifilm offer us a glimpse as to where the future is headed. As for us, we are set to go! Are you?

(link dead) gives FinePix V10 rating of 4 out of 5 and concludes that FinePix V10 is surely more an exercise in having a camera at every price point than being truly innovative. That said it’s fast, easy to use and takes decent pictures.

PC Magazines concludes with good editors’ rating of 3.5 out of 5 that Fuji FinePix V10 is a good camera to kick off the V series. It takes very good photos, offers useful shooting features, and includes four games for curing those traveling blues.

(link dead) reviews V10 and concludes Fujifilm FinePix V10 is poised to ‘change the game’ with its unique combination of video games and superior imaging technology. It made its debut on the show floor at the Consumer Electronics Show in January 2006 and hit store shelves in March. The marketing sure hypes up the games on the V10, but of even more interest than a Picture Puzzle or Shooting Game is the incredibly low noise and accurate colors that the camera produces. The Fujifilm FinePix V10 performed very well during testing, proving that it is worthy of walking in the footsteps of last year’s F10. The older F10 had a larger sensor, more megapixels, and an equally positive set of testing scores – but came in a boring frame. The Fuji V10, however, comes in a metal body that boasts a humongous 3-inch LCD screen on the back and is still slim enough to slip in a pocket. The big screen makes viewing and snapping shots a joyous occasion, but also makes menu-surfing tedious because of the resultant tiny controls. The FinePix V10 has its other positive points: It takes great portraits and makes red-eye a rarity. The Natural Light & With Flash mode keeps indecisive users from wearing out the Menu/OK button. Unfortunately though, users will have to continue the search for an entirely perfect digital camera. This one has a short battery life of 170 shots, which won’t be enough to play games on the way to Grandma’s and then snap shots of her with the kids. Still, the Fujifilm FinePix V10 proved that it had solid imaging technology and could back up its claim to ‘change the game.’

DigitalCameraReview writes that the Fujifilm FinePix V10 is a 21st century version of George Eastman’s 19th Century Kodak box camera, the world’s very first point & shoot. Like Eastman’s camera, the V10 was designed to be easy to use (just line up the image in the viewfinder and push the shutter button), capable of consistently capturing very good pictures in a variety of outdoor settings, and not too expensive. Like Eastman’s camera, the V10 makes it easy to capture those moments, people, and places that illustrate our life stories.

More features, specifications and sample images can be found at (no longer available).