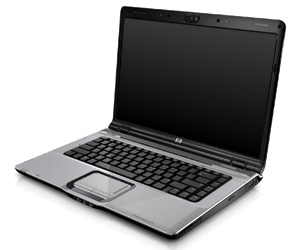 NotebookReview reviews and tests HP Pavilion dv6000t, and concludes that the HP Pavilion dv6000t is a full-featured multimedia notebook with a highly appealing look. Like all notebook computers, it is an exercise in compromise. What sets it apart from other machines, however, and goes a long way to explaining its popularity, is its impressive blend of looks, performance, comfort and price. At current prices, the dv6000t offers a fine mix of components and performance in the $800 to $1200 range. On top of that, it looks good and provides an exceedingly comfortable computing experience. There are only three “cons.” Of these, one, the screen resolution, is really a matter of personal preference and won’t make any difference unless a high-resolution LCD is desired; another, the issue of fingerprints, is rather trivial and may actually inspire the owner to keep the notebook nice and clean; and the third problem may be the rather short battery life.

(link dead) concludes with editor rating of 4 out of 5 that “it looks cool, retails at a low starting price, and boasts an impressive screen. The low battery life causes it to lose a few points, as well as the clunky, somewhat irritating touchpad. I don’t know why I was so bothered by the lack of the latching mechanism for the lid, but it detracted from my overall impression of the build quality. Hardware-wise, I was pretty satisfied with the dv6000t. The Core 2 Duo T7200 (2.00GHz, 667MHz FSB, 4MB L2 Cache), 1GB of DDR2-667 RAM and 120GB SATA hard drive were nice inclusions. I was happy with the TV tuner and its performance with Windows XP Media Center Edition and the remote control worked well. The gaming performance of the GeForce Go 7400 left a lot to be desired, but I went into the review expecting that, as this laptop is not marketed as a gaming machine. When it’s all said and done, HP’s dv6000t is still a great value. If you keep in the back of your mind that the 12 cell battery and a USB mouse would probably be wise investments, everything else is all gravy, and I’d say you’d be very happy with the purchase of a dv6000t multimedia laptop.”

(link dead) picks HP Pavilion dv6000t as editor’s choice and concludes that “the Core 2 Duo processor helped the dv6000t deliver the best MobileMark 2005 score we’ve ever seen from a mainstream portable (279), a full 50 points better than the identical machine configured with the older Core Duo CPU. Battery life was a respectable 3 hours and 39 minutes. So for consumers and business users looking for a fast laptop, the HP Pavilion dv6000t fits the bill.”