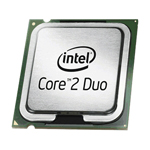 TechSport put both E4300 and E6300 to overclocking test, and then compares, benchmarks and measures the CPUs performance in term of memory, CPU, synthetic 3D and real-world gaming performance, and concludes that “reaching 3.20GHz using either the E4300 or E6300 was quite easy and I believe most of these Core 2 Duo processors will at least reach this frequency. That said, we were able to push our E6300 to 3.50GHz and the E4300 to 3.47GHz. The advantages of the E4300 other than being slightly cheaper, is that the FSB (front side bus) does not need to be nearly as high to achieve the overclock. The advantage of this is that the DDR2 memory frequency can be lowered below 800MHz whereas the E6300 is forced to run DDR2-1000 memory. While we are recommending the E4300 to all those budget overclockers out there, we are not suggesting you rush out and order one right away. If you can wait a little longer until the E4300 is officially announced and more readily available, hopefully then prices will have fallen a bit, making the E4300 somewhat irresistible.”