Home»Software»GPS Navigation & Mapping»Mars Map on Google
Previous Next
Mars Map on Google
Astronomy lovers can now view the 3D detailed map of Mars on Google Mars. It’s a service that much like Google Maps, except that the maps shown is not surface on Earth, but surface of Mars instead. 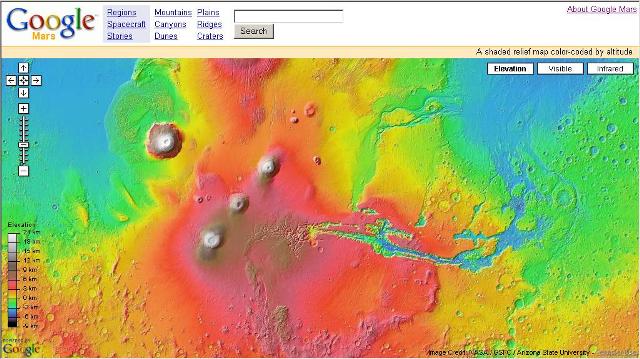 When you first access to Google Mars, you will be presented with shaded relief map of martian landscape, in what Google called Elevation type of Mars’ map. Google Mars has 3 different types of data which you can easily selectable to view on the map:

You can browse the Mars surface landscape the same way as you use Google Maps or Google Earth. And Google is working towards Mars landscape can be navigated via Google Earth client itself.

Google logo on Google homepage which will show “Percival Lowell” when mouse over it. Click on it will lead you to Google Mars.