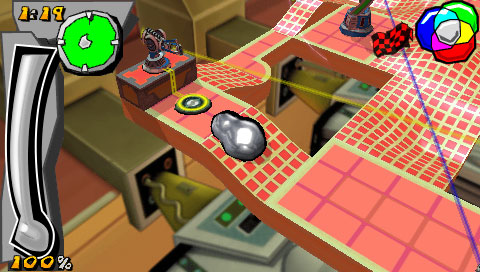 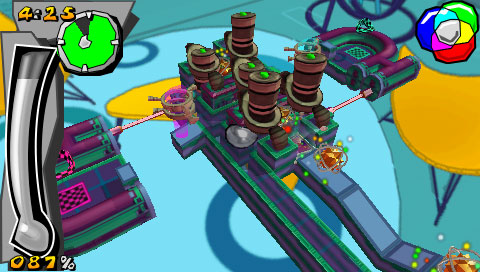 (dead link) previews Mercury Meltdown and concludes that “whereas the first game had a cold, industrial look (which I was a fan of), Meltdown shoots for mainstream appeal with brighter, more colorful worlds. The game is made to look more like a cartoon with cel-shading, an effect that results in Cel Damage-style visuals. Cel Damage, if you don’t remember, was a vehicular combat game from EA released alongside Xbox and GameCube. Meltdown’s art style was instantly reminiscent of that title. The change was pretty surprising to me at first, but I could instantly tell that this was a part of the Mercury series. Mercury Meltdown is going to be one of the most challenging, patience-testing puzzlers you’ll ever play.” 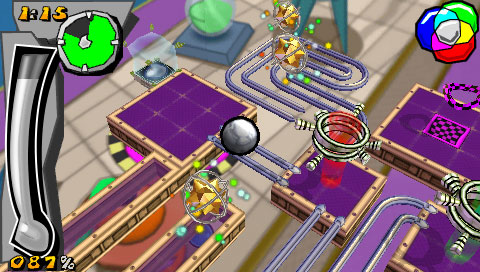 (dead link) previews the game and concludes that Mercury Meltdown’s play mechanics are quite nearly the same as those in the last game, but the big departure from its predecessor is in the game’s presentation and visual style. It’s a lot cuter this time around, with cartoon-like cel-shading effects used to make things a lot less antiseptic, as opposed to the last game’s cold sci-fi look. Your mercury will dance and bounce to and fro in between stages, and overall the game looks friendlier and more inviting than the imposing original. While you still may be stumped by some of the more difficult stages, Mercury Meltdown looks like it’s shaping up to be an intriguing option for those looking for their next big brain teaser.

IGN has a hands-on on Mercury Meltdown on PSP and concludes that “the single player demo that we received focused on a certain number of laboratories that your mercurial blob will explore, such as Chem or Bio labs. While the number of labs appeared to be locked down, there should be more than 160 levels in the final game, which is easily twice the amount found in the original game. That isn’t including a number of additional multiplayer and wireless modes that will be included in the final game as well. Mercury Meltdown will also feature game sharing and downloadable content (most likely in the form of skins for your blob), as well as unlockable party games like races, paintable levels and more. We’re looking forward to playing more of the game, as well as exploring the multiplayer and party games before it ships in late August, but what we’ve seen so far looks like a great adjustment on the original puzzle game.”

First impressions of Eurogamer on Mercury Meltdown are that with the design firmly weighted in the player’s favour this time, the signs are good – and new elements, like rolling blocks to manoeuvre by obstructing their path, new types of mercury-targeting enemy and pads that affect the blob’s viscosity, are likely to entertain players once they get past that initial thrill of fluid Mercury. The expansion of the level pool to 160 hasn’t been a process of dilution by the look of it either. There are plenty of narrow ledges to hug, undulations to work against, colors to mix and multi-part blobs to worry about. Not to mention the usual array of difficult shortcuts to master. This, really, was what attracted us to Mercury in the first place – and our Meltdown code throws up a good few. One, a vertical level that involves reaching turquoise spray-paint on the far side, can be cut short by deftly splitting the blob and then mixing more readily available colors. If the full game can deliver more of that kind of thrill, and consistently avoids the pitfalls of the original, it could be essential.

GameSpot hands-on on Mercury Meltdown and concludes that Mercury was such a challenging game toward the later levels that hardcore players like to upload their best performances onto the Internet to be appreciated by fans. Mercury Meltdown lets you save replays of your best performances, as well as store a ghost replay of your results. These ghost replays are automatically loaded if you replay the level in question. Mercury Meltdown promises to be a more refined take on the original puzzle game, and while the new graphical style might upset some fans, it’s almost certain to win over a wider audience. The level design looks as fiendish as ever, and the new multiplayer modes make an excellent addition to an already large package.