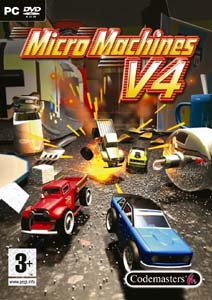 (dead link) reviews Micro Machines V4 and concludes with rating of 6 out of 10 that if you’re willing to ignore Star Force, willing to ignore the dull single player mode, the complete lack of charm and character and the difficulty of unlocking all vehicles then there is fun to be had here if you’ll make good use of the multiplayer modes. It could have been much better, but it proves that the concept still works and hopefully another sequel will be along to refine the numerous problems with this one and prove Micro Machines still is one of the best series of all time.