Home»Miscellaneous»Million Dollars Bonus and Pay Job
Previous Next
Million Dollars Bonus and Pay Job
You working hard to earn your first thousands bucks, tens of thousands or hundreds of thousands dollars, or worst, just barely enough to make your end meets. Most likely it will be a while before you see the first million dollars in your kitty bank account even if you’re a popular problogger cashing on money-spinning Google AdSense. However, if you never get to manage to be a millionaire in this life, blame it on your employer. Goldman-Sachs has just made thousands if almost all of its about 26,500 employees a millionaire almost instantly within this year. For the year, Goldman-Sachs has paid out almost US$16.5 billion in compensation or salary, or roughly US$622,00 for every employee. 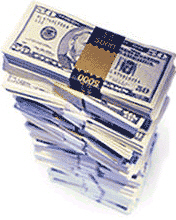 According to Boston Globe, the pay of over 600 thousands dollars, which most of it comes in the form of lavish bonus that will be lashed out later this year, is more than three times the average salary of a Massachusetts surgeon, four times that of a Massachusetts chief executive, and nearly 12 times that of a Massachusetts high school teacher (average of $53,000), with average annual salary for an economist in Massachusetts of just about $70K. No wonder Michael Holland, chairman of Holland & Company, a New York-based investment firm said “Anyone at the bonus line at Goldman Sachs died and went to bonus heaven. It doesn’t get any better than this,” when quoted by New York Times.

Goldman Sachs in Wall Street will not distribute its wealth evenly. At the top end of the pay scale, “golden 25” rainmakers, big deal makers, bankers, managers or bankers in investment banking are reported to receive $20 million to $25 million each while top performers who booked big profits may take home a chunk of those bonus profits, up to $100 million big bucks, according to senior executives at leading Wall Street banks. Besides, Goldman’s most senior executives or those who are called “partners” may get between $10 million and $20 million each in bonus, which is several times their base salary.

If you’re the lucky one who gets the $100 millions dollars bonus dropped from the sky, ABC News has some suggestions on how you can spend your $100 million dollars in a meaningful way, such as provide immunizations for more than 40,000 impoverished children for a year plus host a birthday party for your daughter and one million of her closest friends. But you still have money left, so buy a different color Rolls Royce everyday. Or you can feed 800,000 children for a year, recreate the Tom Cruise-Katie Holmes and Brad Pitt-Jennifer Aniston weddings four times over and buy one of Mel Gibson’s private islands, with still millions left in the bank.

However, you still can’t help Jennifer Lopez to pay the celebrity insurance policy on her body (or booty) which rumored to be for $1 billion, or any part of them with legs at $400 million, breasts at $200 million, also cannot help Mariah Carey to insure against her legs also rumored for $1 billion bucks.