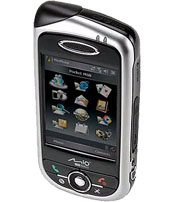 Reg Hardware tested Mio A701 and gave the GPS enabled Windows Mobile score of 65% and concluded that” the Mio A701 disappointed me. I had high hopes that this was going to be a well integrated smart phone satnav solution, but it has too many little flaws. It’s by no means unusable, but it needs to be tweaked quite a bit before I’d consider buying one. As the Mio A701 is sold SIM-free it’s not going cheap, so expect to pay around £370 without the MioMap software and about £440 with the software included. You might be able to find it for less from some companies that offer it at a discount if you take out an airtime contract, but it will still cost you larger part of £200.

If you desperately want an all-in-one GSM smart phone, PDA and GPS unit, the Mio A701 is worth considering, but it doesn’t excel as any of these three devices. It’s a real shame Mio didn’t spend a little more time on their R&D – with a few tweaks the A701 could’ve been so much better.”