If your Mac system temperature is too high, Mac users can adjust and modify the fan speed to higher speed in order to make the Mac machine runs cooler at lower temperature. There are a few GUI (graphics user interface) based utility software that can help MBP and MacBook (and MacMini) users to control and adjust the speed of the fan cooler.

smcFanControl is one of the such fan speed control utility, to cool down MacBook (Pro). smcFanControl let users set the minimum speed for each built-in fan individually. However, in order to protect and note to damage the computer or notebook, you won’t be able to set the minimum speed to a rate which is under Apple’s defaults. So users can increase the minimum RPM speed of the fans to release and dissipate more heat and thus cool down the system. To change the fan-speeds, users need to authenticate with valid credentials of an user-account with admin privileges. Some note is that you need to check the “Auto Apply after Launch” option and add smcFanControl to Login-Items to auto apply your prefer fan speeds settings after restart, and in order not to lose the changed settings after standby, smcFanControl has to run in the background. 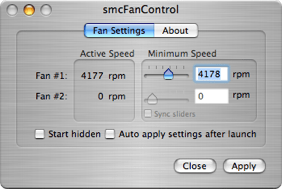 While increasing the RPM speed of the fans in MacBook (Pro) can make the laptop and notebook cooler, however, it will consume more power and thus reduce the battery life slightly. And it could shorten the life of the fans too, and the noise of the fan will be louder slightly too.