Home»Software»Utilities»Mori 1.2 Digital Notebook Review by Ars Technica
Previous Next
Mori 1.2 Digital Notebook Review by Ars Technica
More 1.2 from Hog Bay Software is a digital notebook that makes it easy to record and organize your thoughts, ideas and notes. Mori can function as notebook, project manager, research assistant, and more functionality as Mori able to keep almost all information such as notes, tasks, clippings, and writings. More has an organizational notions of files and folders, with Smart Folders feature that show notes that matched the criteria automatically. Mori is expandable and requires Mac OS X 10.4 or later. 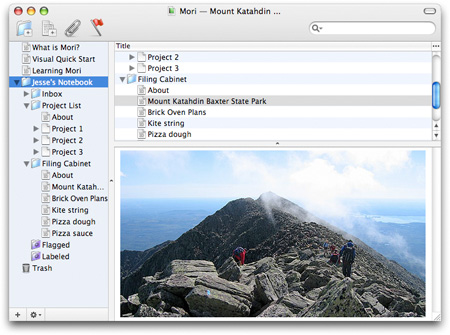 Ars Technica reviews Mori 1.2 and concludes that “Mori not only falls toward the low end of pricing for digital notebooks, the developer offers Mori under a pricing scheme that is one step away from an unreconstructed communist utopia. Upgrades are free; the developer asking for donations when users find features useful. You can even get the source code if you are a registered user, so if price is a feature, then Mori compares favorably to the competition. Comparing Mori beyond price is difficult, as choosing a digital notebook is an intensely personal choice, like a favorite soda or condom. I chose Mori because its width and girth are a good fit for me, but were I to try to descibe it objectively I would say Mori helps get you organized without getting in the way.”