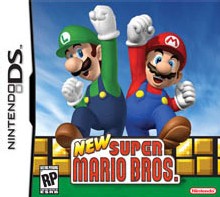 (dead link) reviews New Super Mario Bros for Nintendo DS and concludes that the games has some solid multiplayer modes round out the game. “New Super Mario Brothers is another welcome return for Mario, and I enjoyed every minute of it – despite my lack of a history with the Italian plumber.”

Some tricks for New Super Mario Bros games are you can hold the L and R buttons while selecting a file to play as Luigi, and iff the player pauses the map screen and presses L, R, L, R, X, X, Y, Y, the game enters “challenge mode”, in which most levels scroll only to specific directions.

(dead link) details tricks in New Super Mario Bros Reviews including ability to become giant-sized or shrink down to almost nothing. This allows him access that he doesn’t normally have as he hops and flips through the levels of each world, and 18 minigames that really shine because they capitalize on the two video screens. The games use the screens together to create a sort of vertical wide-screen playing field. New Super Mario Bros can be played wirelessly too where player compete against three other people in the minigames, or against one other player in a challenge featuring Mario and Luigi, each trying to see who can collect the most stars.