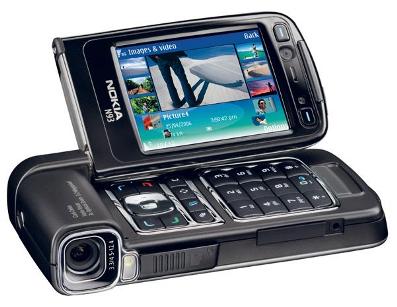 Movie-review reviews Nokia N93 camera phone and concludes that Nokia N93 camera quality is a lot better than one installed in Nokia N80, and by some aspects better than in Sony Ericsson K790i. “We can’t really say that Nokia N93 is a mobile device, since it’s quite big after all. It can try being competitive with small digital cameras, but here it loses battle in terms of price and size. You should remember that this is a hybrid device and give some discount on that. Let me remind you that main idea told in first part of our review. This device is targeted for people who are in need of such features, this is not a mass product. This product is used by Nokia to test out new technologies and solutions. Used components allow creating similar phones with smaller case size which is proven by Nokia N73, Nokia N83. Raise of devices with increasing camera possibilities raises challenge for inexpensive small digital cameras, competition gets tougher and things are getting more and more interesting.”

LetsGoDigital concludes that the Nokia N93 is not the most compact mobile phone to take with you. Due to it’s somewhat bigger size and it’s rather high weight a bag would be handy to carry it around in. It is not a mobile phone designed for the compact mobile phone enthusiast. The built-in camera of the Nokia N93 is a certain step towards quality. During Photokina 2006 the new Nokia N95 was introduced. A very compact en stylish mobile phone with a recording resolution of 5 Megapixels. Undoubtedly a model we will be hearing more about. The Nokia N93 Cellphone remains to be a different model, with a high functionality. One of the biggest pluses is the battery power, making extended work with the phone possible. The screen is ideal, well organized and practical in use. Summarized, the out of the ordinary Nokia N93 features a lot of interesting functions and despite the above downsides remains a recommendation.

3G concludes with total score of 84% and concludes that “it is very hard for us to make our mind up about the N93. It is no substitute for a dedicated digital video camera, but as a video shooting phone none of the competition comes near it. Its other features are plentiful and impressive – we’ve not been able to run through them all here, but it is one heck of a size and with the handset fully opened to make voice calls it feels like something from the 1980s. A fair conclusion would be that as a showcase the N93 is impressive, while as an everyday phone it is probably too much for many people to carry around.”

All About Symbian compares Nokia N90 and Nokia N93, concludes that the typical buyer of the N93 won’t be that interested in running games or web browsing or listening to music. He or she will buy it to split duties between phone, camera and camcorder, and I’d expect them to use a 2GB card for maximum recording time, with no other files on the card. The N90 buyer, on the other hand, wants a good camera, it’s true, but knows there’s more to a smartphone than being a makeshift digital camera, and will be using office and PIM applications, games, music players and so on. It’s a very different scenario for a very different device.

(dead link) says you don’t buy N93 because of the lens cap where it’s tiny, it’s plastic, it only fits on one way round (making it fiddly to replace) and it’s completely detachable and you will lose it almost instantly. Same goes for the USB cable connection cover. And, it’s big and heavy. Like, 1996 big. During a call, when the speaker is in the right place to be heard, my chin barely reaches the top of the keypad. Using it makes me feel like a tiny person in a land of giants. Heavy like I had to tighten my belt to stop my jeans falling down when it was in my pocket. The reason to buy is video. The one thing that makes this handset stand out is it’s awesome (by phone standards to date) video recording capabilities. If you’re a video fan and if you don’t already have a pocket sized digital camcorder, or you want to be a video fan and don’t have a camcorder – maybe you should consider this phone. Consider it quite hard, and do go and test it out in person, because it does one thing well, and a lot of other things not quite as well as it should.

(dead link) reviews N93 camcorder phone and concludes that “Nokia N93 is the technophile’s answer to the Motorola SLVR or LG Chocolate-thin fashion phones that look great but don’t offer much in the way of features. That’s because the N93 is a big, chunky phone, with a novel way of working and an impressive list of features. If you can put up with its size and heft, you’ll find it useful for far more that just making calls. In a market full of thin, underpowered phones, it’s a pleasure to find one that’s genuinely useful in a variety of ways. It’s pricier and larger than most people will want, but we think it will find an audience with people who appreciate its power and versatility.”

Gadgetell concludes that N93 is a great phone not meant for the average user – but certainly would not displease the average user. It packs a punch and if you’re not one to care about features then this is not for you. The price my seem extreme but if you were to take an iPod video roughly priced at $250.00, and 3.0 megapixel camera roughly priced at $200.00 and a Sony Handy-cam roughly priced at $500.00, this phone is actually a bargain. If this phone was a celebrity It would be a mix between Bill Gates and Steven Spielberg. It doesn’t have the looks but its certainly packs the brains as well as the creative muscle. The introduction of the DVD style video, a high intensity 3.2 mega pixel camera, and even an option to listen to radio. With all its feature and an extensive imagination, there is nothing this phone can not do for you.