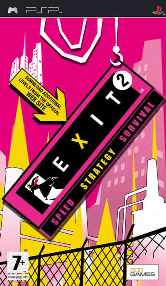 The basic of EXIT is pretty easy. Player is to lead the main character Mr. ESC, an escapologist, out of hospitals, underground facilities, offices and other buildings within a time limit. Along the way, the player will be hindered by obstacles such as fires or even earthquakes. Sometimes the player must help trapped individuals escape as well, and it will take quick thinking and planning ahead to exit the building successfully.