RapidLeech script was originally created by a Russian named Vyrus, and then been modified, improved and enhanced by various programmers including Kloon, who then released copies of updated encrypted open source source code. Rapid Leech PHP script works on all web host with PHP enabled on Linux, Windows, FreeBSD, OS X, or Sun Solaris. And the file sharing or upload and download services that are supported include RapidShare.de, RapidShare.com, Uploading.com, FileFactory.com, FileVenue.com, MegaUpload.com, Megarotic.com, MyTempDir.com, Getfile.biz and Webfile.ru.

Download RapidLeech v2.2. For instruction on how to set up the Rapid Leech host, get the user guide from forum.

To use Rapid Leech script, a web host which supports PHP scripting is needed to install and run the script. Many people confuses the leecher as a program or executable, and is looking for .exe file. But in fact it’s not. Users have to upload the PHP scripts to the web host they own or subscribe. After uploading to the server and configure Apache or HTTP server to publish the RapidLeech script to the web, users can access Rapid Leech web-based user interface via hosted domain URL. From there, users can enter a download link to the file in the main window and include any comments such as password to the locked file, or access the options to send file to email with split file ability, proxy settings, define RS rapidshare.de/rapidshare.com Premium Account username and password, and save location in the settings window, or use the file manager included to view a list of all downloaded files with comments. 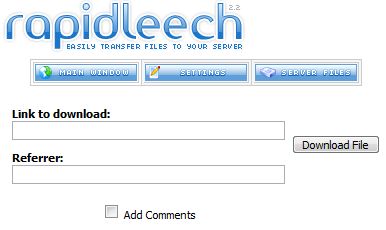