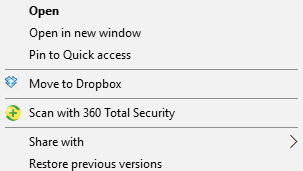 In order to housekeep and reduce the bloatness of right click contextual menu, and you want to remove and hide the “Scan with 360 Total Security” item, the program has an option to easily turn if off.

Deselect the Scan file with mouse right-click option under “File Scan” section, and the entry will be removed from right click menu instantaneously.