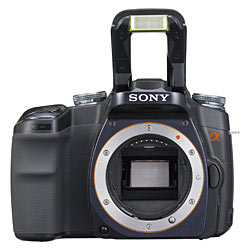 (link dead) has a first look review on Sony Alpha 100 digital SLR camera and concludes that “our first impression is that the Alpha was a good, perhaps even great, digital SLR, but that it will be a couple of generations before we see Sony deliver something truly outstanding.” The good points include easy to use, fast and responsive plus capable of some stunningly professional results, with the right lens attached. Bad points are slight plastic feel, loud shutter noise and 600 pounds is the body only price where lenses cost extra.

TrustedReviews reviews Sony Alpha α100 Digital SLR and concludes with overall rating of 9 out of 10 that it’s an extremely impressive debut from a new player in the digital SLR market. The Sony Alpha α100 is pitched at the consumer end of the market, but is actually a better camera than most of its mid-range rivals too. It bristles with clever technology, but is very easy to use and produces consistently excellent results. It would be a good camera for a newcomer to SLRs, but more experienced users will also find it very satisfying to use. 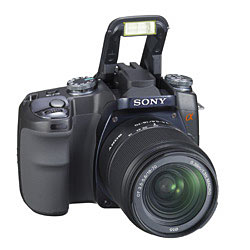 Pocket-lint has a first look review on Sony Alpha 100 DSLR digital camera and concludes that from Sony appropriating the KM D-SLR technology to the launch of the Alpha 100 and a complete camera system, it has taken 6 months. Obviously, a lot was happening behind the scenes prior to KM pulling out of the photo market, but this speed is something of an indicator, a statement of intent, of just how serious Sony is in making inroads into the current market dominance of Canon and Nikon. Only time will tell how successful it will be.

More specifications, features and sample photos at or (no longer available).