Home»Software»Enterprise Solutions»Storage Spaces Virtual Disks Is Not Writable (Read-Only) & Not Auto-Attach
Previous Next
Storage Spaces Virtual Disks Is Not Writable (Read-Only) & Not Auto-Attach
On a computer that has storage pools or storage spaces created, the storage pools is set to read-only and the virtual disks does not attach automatically if you reinstall the operating system. Likewise, if you remove the physical disks which are used to create the storage space, and bring the disks to another computer, the same symptom will happen, i.e. storage pool is offline and no virtual disks are attached. In Disk Management, the virtual disks show that “the disk is offline because of policy set by an administrator”. 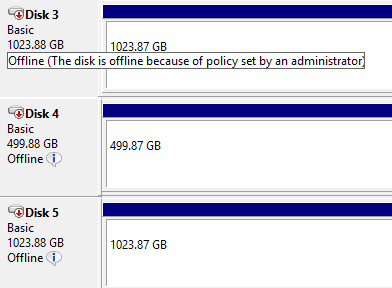 On Windows Server’s Storage Pools area of Server Manager, the health status of the storage spaces and virtual disks is shown as “Unknown”. 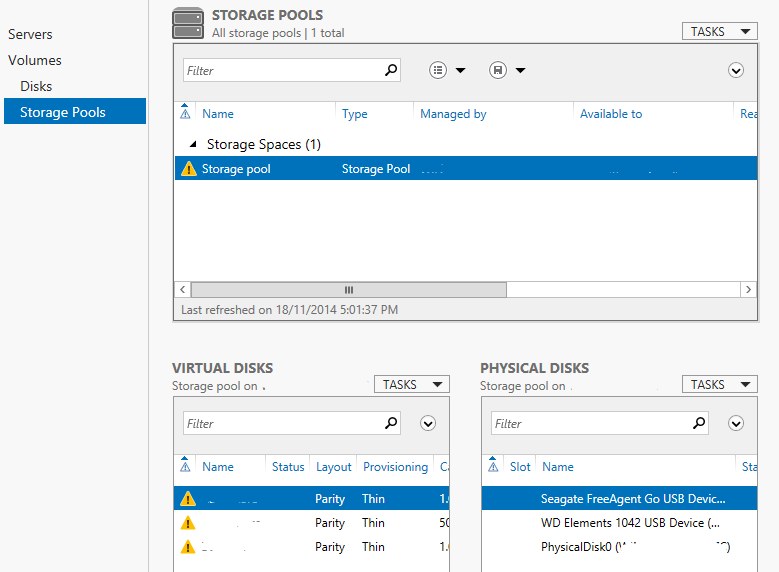 Attempt to manage such as delete any virtual disks will fail with error message stating that “error deleting virtual disk: the storage pool could not complete the operation because its configuration is read-only.”

To resolve the issue, open a Windows PowerShell window as Administrator, and run the following commands.

Check the read-only state of all available Storage Pools:

If OperationalStatus is set to Read-only, run the following command to set it to writable (replacing Name of Storage Pool with the actual name of the storage pool):

If you want to change “Read-only” attribute of all storage pools at one go automatically, use the following command:

Run the following command to check the details of virtual disks:

Note the IsManualAttach attribute. If it’s set to True, it means that you need to manually attach the disks on every restart of server or PC before you’re able to use the disks. To make sure that the virtual disks can auto-attach, run the following command: