With the release of Windows 10 Creators Update v1703 15063, Microsoft has made several changes to the operating system in order to take advantage of the new features and functionality that are introduced, or to switch to more future-proof utilities.

One such change is the default to Windows PowerShell. PowerShell is an automation platform and scripting language for Windows and Windows Server that allows you to simplify the management of your systems. PowerShell consists of a command-line text-based shell and associated scripting language that harnesses the power of the .NET Framework, providing rich objects and a massive set of built-in functionality for taking control of your Windows environments.

If you’re not a programmer or advanced user of Windows or Windows Server, the good old Command Prompt, also commonly known as Cmd, is an easier choice. Beginning from Windows 10 Creators Update, Windows PowerShell is the default option that appears on Win+X menu (also known as Quick Access Menu, WinX Menu or Win+X Menu) when you right click on Start button or press Win + X keyboard shortcut (if you upgrade, your original setting of using Command Prompt may stay). 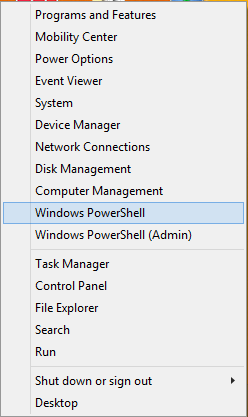 It’s also possible to change the setting directly in the registry, with the following registry registration file:

Save the text as a file with .reg file extension and then run it, or manually navigate the registry hive to change the value of the key (or create if it’s not already available).