The Brightest Supernova and Star Explosion

Home»Miscellaneous»The Brightest Supernova and Star Explosion
Previous Next
The Brightest Supernova and Star Explosion
A supernova is a stellar explosion of star that creates an extremely luminous object that is initially made of plasma (an ionized form of matter) and may briefly out-shine its entire host galaxy before fading from view over several weeks or months, as in current observation of SN2006gy, except that the dead star was at least five times brighter than most supernovae, peaked at the brightness for 70 days instead of usual a couple of weeks, and shined at levels brighter than other supernovae for several months.

SN 2006gy was about 150 times bigger than the well known star known by us as Sun in Milky Way, and is located in NGC 1260 galaxy. It was first discovered in September last year by a graduate student in Texas. 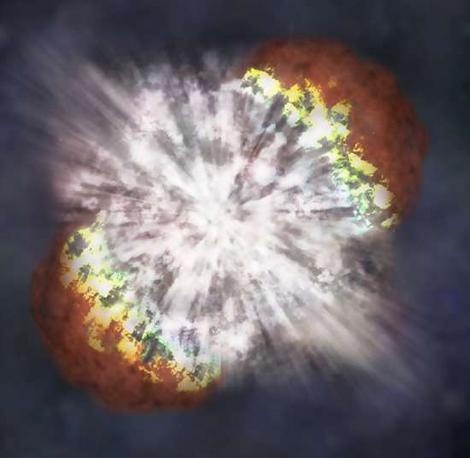 Artist illustration of the moment the supernova happens.

The supernova is actually not happening right now. SN 2006gy is some 240 million light years away from Earth, so you’re actually seeing events that happening 240 million years ago, if the ‘signal’ traveled at light speed to reach Earth and was captured by NASA’s Chandra X-ray observatory telescope. A light year is about 6 trillion miles.

Observation shows that SN 2006gy didn’t become a black hole like other supernovae and skipped a stage of star death. Thus astronomers believes that this supernova was actually caused by the collapse of an extremely massive star, and not the most likely alternative explanation for the explosion, the destruction of a low-mass star. Supernovas usually occur when massive stars exhaust their fuel and collapse under their own gravity, but in SN2006gy’s case scientists believe it was obliterated in an explosion which blasted all its material into space.

The explosion of SN2006gy may be a sound and light show preview for a similar star in Milky Way, Eta Carinae which is just 7500 light years away from Earth, which also suffered hugh energy lost prior to explosion as what happened in SN 2006gy.