In Windows 10, the Previous Versions feature may not be working properly on a disk drive, partition or volume, despite the Shadow Copy (also known as Volume Shadow Copy or Volume Snapshot Service or VSS) and/or System Restore is enabled, configured and working correctly. 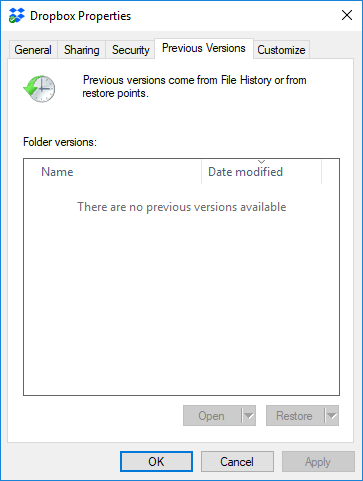 The Previous Versions also appears to be not listed for system drive (e.g. C:\) only. In fact, if you just manually created a restore point, the corresponding previous version may appear for a short while, before disappearing again. Previous Versions feature is working fine for other non-system drives such as additional or secondary disk drives, volumes or partitions, portable hard disks, USB flash drives and etc. The issue behavior happens too on just installed out-of-the-box Windows 10 operating system.

In order to view or recover any files saved by System Restore or Shadow Copy, and if Previous Versions indicates that there are no previous versions available and thus does not list them, you can make use of several third party tools such as ShadowExplorer, ShadowCopyView, System Restore Explorer, Shadow Copy Explorer and Previous Version File Recoverer that let you browse and view various System Restore points or Shadow Copies to recover older version files and folders at the point of time the snapshot was taken.

Fix for Previous Versions Not Available in Windows 10

If you prefer to use just the built-in GUI of Previous Versions without the help of third party utilities, you can manually create a Previous Versions snapshot by running the following command in Administrator’s Command Prompt, which makes use of Win32_ShadowCopy class in WMI.

Change the drive letter if applicable.

Above command will create Shadow Copy snapshot which will be listed only on Previous Versions. It will not show up in System Restore recovery points, and thus cannot be used to perform System Restore for Windows OS.

If you want Windows 10 to automatically create a snapshot of your drive for Previous Versions, you can create a scheduled task using Task Schedule.