Home»Miscellaneous»Tomb Raider Surrenders to Curse of Ancient Egyptian Pharaoh Mummy
Previous Next
Tomb Raider Surrenders to Curse of Ancient Egyptian Pharaoh Mummy
Do you believe in curse, especially the curse that was made thousands of years ago in ancient Egyptian era where bodies of the dead kings and queens were preserved into mummies and placed into pyramids. It’s kind of hard to believe, but a gentleman in Germany certainly believes so, in fact, so believed he is in the Curse of the Pharaohs that he returned carvings stole in Egypt by his stepfather which he blamed brought the curse and bad luck to his stepfather. 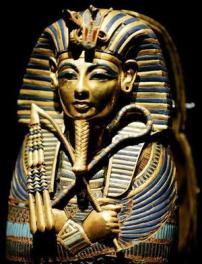 (link dead) reported that the stepfather had stolen the piece of partial carving around Valley of the Kings while on a visit to Egypt in 2004 and on his return to Germany suffered paralysis, nausea, unexplained fevers and cancer before dying recently, the anonymous man said in the note. The stolen carving was returned to Egypt embassy in Berlin in a package containing part of a Pharaonic carving with a note saying the man felt obliged to return the carving to make amends for his late stepfather and enable his soul to rest in peace.

Kind of crazy especially in today’s advanced digital world. But it’s kind of supernatural phenomenon that hard to explain. The ancient Egyptian Pharaonic curse states that whoever disturbs the tombs or mummies of ancient Egypt’s Pharaohs will be stroke down with bad luck or worse, given up his or her life. The curse gathers momentum after the high profile discovery Tutahkhamun’s tomb in 1922 (figure), and subsequent death of excavation’s financier Lord Carnarvon at Winter Palace Hotel, Luxor. The room he died in is still not open to public. So never steal, it’s a good practice no matter it’s modern or ancient things. However, the authenticity of the carvings is yet to be determined by Antiquities Authority of Egypt.