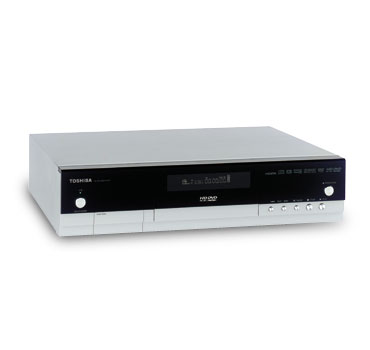 TVS reviewed Toshiba HD-A1 HD DVD Player but not recommended it by giving HD-A1 the rating of 2 stars out of possible 10 stars. It said “summing up, using the Toshiba HD-A1 was a frustrating experience. Beguiled by its gorgeous high-definition video, I was even more frustrated at its sluggish response to remote commands and crashing performance. Its clumsy remote sets a new low in inept design, configured in a way that reveals that its designers were apparently completely unaware that human beings would be using it. Adding to its long list of shortcomings is the HD-A1’s inability to handle that holy grail of the HD DVD format, 1080p.

I can only hope that this is just a rough first effort which was perhaps rushed to market. The Toshiba HD-A1 is unacceptable, even for early adopters. Please, do yourself a favor and don’t go through the trouble of buying it, setting it up and being frustrated by it. Wait until this format is more mature, because now, it reminds me of the early days of MS-DOS computing. The only reason I give it more than one star is because of the high quality of its video.”

(link dead) also tried up Toshiba HD-A1 HD DVD Player and concluded that if you do jump in straightaway, you’ll be getting some “early” technology. It’s a little slow starting up and shutting down, and you must have a high-definition TV with an HDMI input, or a DVI input that is HDCP compatible. Don’t worry about what it all means, just pull out your TV’s manual and wade through the acronyms until you find these. My plasma TV, a two-year-old Hitachi, just made the cut. With a little patience, I was able to get a beautiful picture, but when I switched video sources, the HD DVD player got confused and froze up, requiring me to restart the thing. I can’t say that newer HDMI sets will have this problem, but I imagine anyone with an older yet compatible set like mine should be ready for hiccups.”

(link dead) had a hands-on on Toshiba HD-A1 and the first impression was that “so should you rush out and buy an HD-A1? With a looming format war on the horizon the best bet is always to wait on the sidelines until a clear-cut winner emerges. I encourage ManRoom owners with deep pockets and urges to own the latest and greatest to at least wait until we spin a real HD-DVD before taking the $500+ plunge into an unproven format. With no real in-store promotion underway and full-blown marketing yet to commence, finding a player shouldn’t be too difficult for the foreseeable future. What will be harder is finding a store employee who knows what you’re asking for.”

HDBeat purchased Toshiba HD-A1 and concluded that “HD-DVD is great, but will you notice? If you can’t tell the difference between DVD’s and HBO HD than you might be just as well off with a upconverting DVD player. If you never noticed HBO-HD’s cropped movies, non-dynamic sound and compression artifacts you may be better off sticking with HBO-HD. If you do notice these annoyances you won’t be disappointed with HD-DVD or Blu-Ray. The only way I will return it, is if the studios don’t deliver with the titles.”

(link dead) has a first look on Toshibad HD-XA1, the more expensive model of Toshiba HD-A1 and concluded that HD-XA1 is a little disappointing, especially because of the speed. The player has a hefty price tag–it is currently available in Japan for about $847 and will be launched this month in the U.S. for $800–and the slow boot-up is a surprise. But make no mistake, the picture quality is great and these speed problems don’t affect enjoyment or operation while movies are being watched.

(link dead) also reviewed Toshiba HD-A1 and concluded that “it would be irresponsible of me right now to make a blanket recommendation for either HD-DVD or Blu-ray (or to recommend high definition in general, for that matter), given the format war going on and the hardware expense. What I can say for sure, though, is that for the most part, the Toshiba HD-A1 HD-DVD player works as advertised: It offers a superbly detailed picture; along with a two-hour-plus movie, it accommodates multiple audio tracks and bonus items on a single disc; and as of this writing, it is priced far less than the anticipated cost of its Blu-ray competition. Now, if Toshiba could take care of those few glitches I mentioned, the machine might be close to perfect.”

(link dead) summarized their conlusion as “should you care? Probably not. Because unless you already have a state-of-the-art high-definition television at least 40 inches in size, you won’t notice much of a difference.

Here’s my advice: If you’ve got a spare $500, use it toward an upgrade to a bigger set instead. In the time it takes to save up another $500, the price of HD disc players will probably drop and a pending format war may well be decided.”

(link dead) tested and benchmarked Toshiba HD-A1 and concluded that “as an SD-DVD player, the HD-A1 could be a lot better. I’ve said it too many times now; the operability of the player is a big part of the whole experience, and the HD-A1 has a long way to go in this regard. While I don’t expect a first generation player to be perfect, I do expect better than this. The HD-A1 just feels rushed, and I haven’t even gone into the issues I’ve found on the HD-DVD side. While I am excited about the future of video in our homes, due to the horrible operability of this player and other issues that I will go into further in the full review, I can’t recommend the HD-A1 as a SD or HD DVD player right now. I can’t help but think this would be a very short term investment and this format will see better players long before this format really takes off. As a standard DVD player it is the best yet from Toshiba from a video processing standpoint, but its a big step back in every other department.”

Home Theater Blog concluded that “please keep in mind this is an entirely new format, even though it’s called HD-DVD it would be a misnomer to simply assume this is DVD’s in HD. While high definition is obviously an element, the format is slightly more encompassing i.e. the promise, once and for all, of generating a viable high-resolution audio format.

As with any new format that has to interface with older equipment, the occasional incompatibility issue has a chance to rear its ugly head although I’m happy to report I’ve suffered no such problems with HD-DVD.

In almost every scene of every HD-DVD title I viewed on my 80′ screen, HD-DVD trounced all other HDTV sources I have at my disposal. Whether it was through HDMI/DVI or component, the image quality was undeniable. Once high resolution surround hardware is available, the overall experience will surely improve even more. For these two reasons alone I would be hard pressed to not recommend HD-DVD to any videophile.

That’s not to say I’d recommend it to everyone (yet). If you’re relatively new to the HDTV experience and the whole format war really has you put off then by all means wait it out. But if you’re like me and the lure of gorgeous big screen images in hi-def is overwhelming, then HD-DVD makes sense. I say makes sense but possibly the cutesy ‘makes cents’ would be appropriate here as well.”

(link dead) felt that “there are a load of details I haven’t had time to sort over for this report, including a full audition of all the players’ and discs’ sound capabilities, interoperability, and how the new zoomy menus and special features on the HD DVD discs work (or don’t).” The high points for HD-A1 include stunning image quality and potential for much improved audio over DVD, while the low points include sluggish loading, abysmal remote, limited titles available at present, and, of course, that little format war.

So far, Universal and Warner has released a few movies in HD format including Swordfish, The Last Samurai, Million Dollar Baby, Phantom of the Opera, Apollo 13, GoodFellas, Doom and Serenity, with upcoming release to be Bourne Identity, The Matrix, Shawshank Redemption, Full Metal Jacket, Jarhead and Chronicles of Riddick.