Home»Software»Utilities»Unzip (Extract All) Zip Files in Windows Vista is Painfully Slow – Workaround
Previous Next
Unzip (Extract All) Zip Files in Windows Vista is Painfully Slow – Workaround
Windows Vista also has a built-in free zip and unzip compression and decompression utility as similar to Windows XP, except that the extraction or uncompress functionality in Windows Vista appears to be very slow, buggy and broken, in other word, simply sucks. When unzip and extract the contents of a zip archive in Windows Vista by clicking on “Extract All” or “Extract Files” in right click contextual menu, the extraction waiting time may take forever literally – a few hours and minutes – just for a relatively a few megabytes zip file, and worse and longer time if the compressed archive is big MBs, and those zipped file with lots of folders and sub-folders. In worst case, the uncompressing rate can goes as slow as 2 bytes per second, and even stalling. 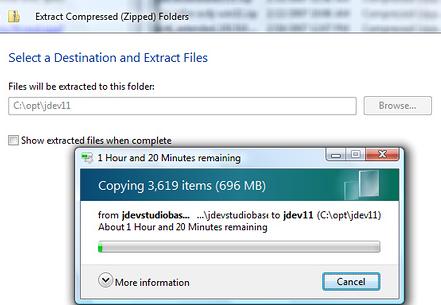 Other than slow decompression, the Windows Vista zip archive extraction may fail with very weird and funny errors too, where the extraction tool may prompt message saying that some files or folders cannot be written or replaced, which may especially usual when a file, probably zip file inside the archive, and folder has the same filename, where the files tend to write over themselves. The pop up dialog allows users to click on “Try Again” or “Retry”, the unzip process may incomplete. There are other issues such as over unencrypted files and only empty folders are created, likely due to the slowness of extraction.

Microsoft hasn’t yet release any hotfix for this ZIP support issue yet, but they’re expected to release an update to fix and patch all decompression problems soon, or include the solution inside Service Pack 1 (SP1) for Windows Vista. Meanwhile, here’s a few suggestions or workarounds to get rid slow unzip problem and as a temporary resolution to extraction in Vista runs very slowly.

If you have downloaded the ZIP files using Internet Explorer web browser, chance are the downloaded zip files are blocked to help protected the computer as part of the new security feature in Windows Vista. The blocking of .zip files, probably to stop email malware, does slow down the unzipping process. 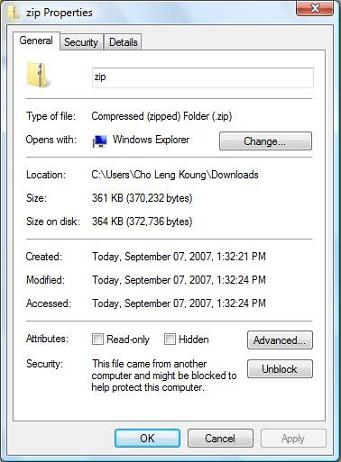 Thus to archive faster extraction execution time, especially for large ZIP files unblock the zip files that you had downloaded from the Internet with following this steps: Right-click on the zip file, then select Properties on contextual menu. At the bottom of General tab, click Unblock, then finish off with Apply or OK. Unzip the files afterwards. Too bad, you have to do this to each zip files one by one.

In most cases this is not the cause that makes uncompressing using Windows Vista built-in unzip utility slows to a crawl. However, some users reported that disable any memory resident antivirus, anti-spyware and anti-malware program that constantly monitors and checks your system for possible threats works to speed up the decompression. One such notorious software is Windows Live OneCare. If you have it, try to disable it temporarily and then unzip.

Only the built-in ZIP support in Windows Vista is affected by this bug, while all other third-part external compression and decompression file archiver utilities works fine. May be the slowness is actually a plot by Microsoft to force users to buy and rely on external tools to avoid antitrust claim? Anyway, some utilities that you may consider including the freeware 7-Zip, shareware WinRAR, ZipGenuis and PowerArchiver.