As shown in the name of ISO image file, the build 10134 floating on the Internet now is not from fbl_impressive branch, which is the branch which all Windows Insiders subscribed to. Instead, the build 10134 leaked appears to come from winmain_prs branch. The winmain_prs branch is a branch of winmain, the main Windows development branch, and is used by Microsoft to provide and share current development builds to a select group of Microsoft’s closest partners. 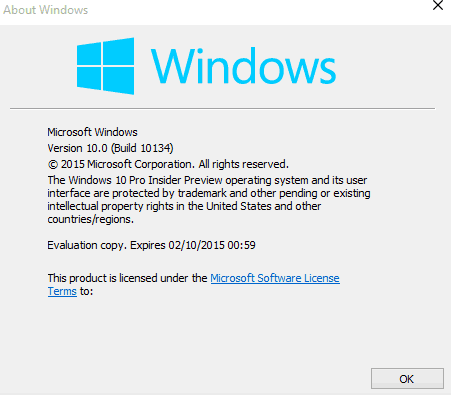 The new leaked builds appears to be more stable than Windows 10 Build 10130, which was officially released by Microsoft, and comes with several settings and apps that do not exist previously. Do note that you may need to reset the branch which you’re on after installing this to receive future updates from fbl_impressive branch.

Windows 10 general availability (GA) date is on July 29th, 2015, and its RTM date is expected to be much sooner.