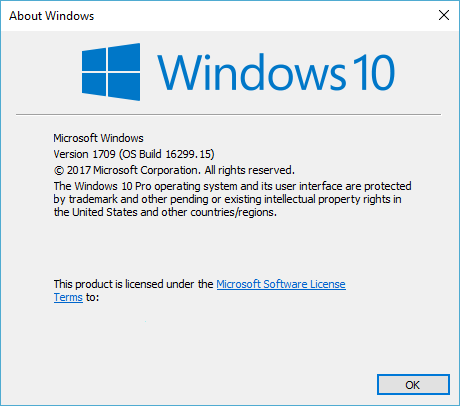 It’s likely that Microsoft continues to release cumulative updates to bring minor build version higher than 15 before or on the general release day. However, build 16299.15 is likely to be the one that made into ISO images, burnt to retail DVD discs and pre-loaded onto new PCs by OEM system builders.

Windows 10 Fall Creators Update brings some new features such as OneDrive Files On-Demand (which is essentially the popular OneDrive placeholders that was canned by Microsoft), Paint 3D, ePub and eBook support in Edge, My People for pinning contacts to Taskbar, improvements to the onscreen keyboard, ability to individually controlling the volume of WP apps, updated File Explorer context menu and more.

Microsoft has not released the official Windows 10 Fall Creators Update Build 16299.15 ISO images yet. However, the ESD files for the build have already available on the Windows Update, and you can easily convert ESD to ISO.

Can’t wait to get the Fall Creators Update? If you’re already a Windows Insider, head to Settings -> Updates & security -> Windows Update -> Check for updates. If not, join Windows Insider program.

Once Windows 10 Fall Creators Update RS3 branch is wrapped up, the Windows Insider will start pushing RS4 (RedStone 4) builds to Insiders in the Fast Ring, which will be the same RS4 builds as those who chose to join Skip Ahead and have already started receiving RS4 builds.