Home»Operating Systems»Windows»Windows 10 Home & Pro OEM Licenses Price List
Previous Next
Windows 10 Home & Pro OEM Licenses Price List
The only price that is certain for Windows 10 currently is free, where Microsoft is offering free upgrade to Windows 10 for all Windows 7, Windows 8 (through Windows 8.1) and Windows 8.1 systems. Microsoft does not announce yet the price that they will sell Windows 10 to new customers or people who owns system that does not entitle to free upgrade offer.

Newegg, a popular US e-commerce website specialized in computer hardware and software, has published the product listing, together with pricing and release date, for OEM versions of Windows 10 Home and Windows 10 Pro. Newegg is also accepting pre-order for the Windows 10 OEM versions.

Here’s the prices of Windows 10 according to Newegg: 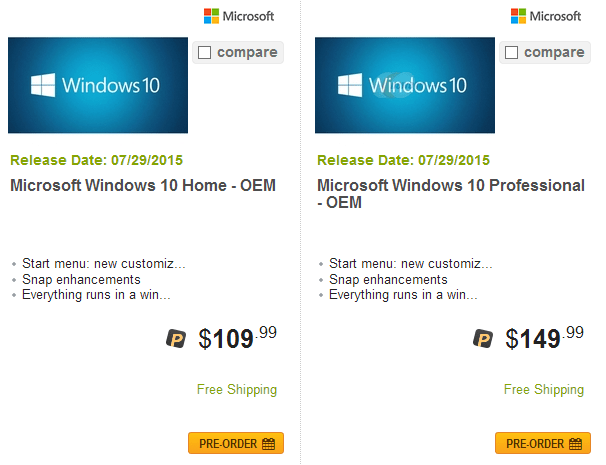 Also listed on the Windows 10 OEM product listing is the system requirements for Windows 10.