In fact, the Windows 10 Launch page by Microsoft specified that Windows 10 is coming on July 28th (though it may be just a typo).

But the roll out of free Windows 10 upgrade to PCs and computers that reserved the free upgrade does indeed begin. Several users have been prompted by Windows Update that “your upgrade is ready to install” with options to start the upgrade now or schedule it for later. The early birds seem to be those from Asian region, such as China, where the timezone is close or already July 29th. 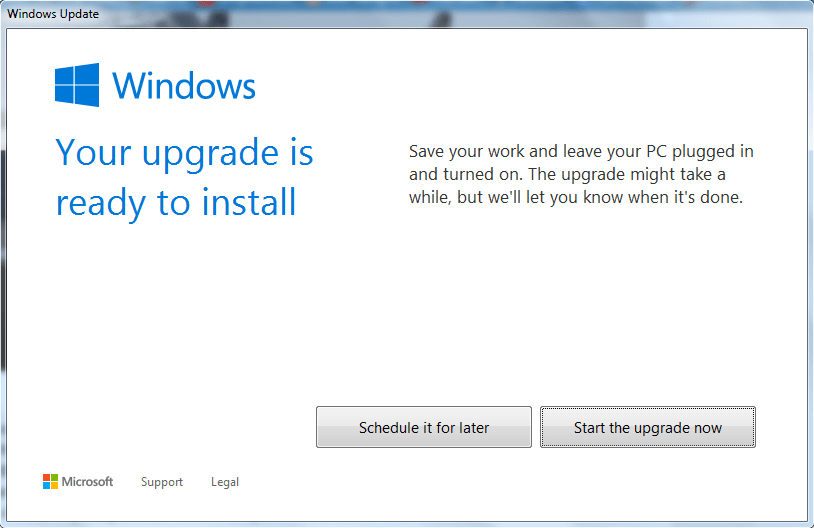 After upgrading to Windows 10 and applying all updates, the Hardware Abstraction Layer in MSinfo shows that the version is 10.0.10240.16392. Apparently the Zero Day Patch (ZDP) or Day One Patch applied automatically in the upgrade process may not be complete and include all the updates released to-date, as user may still need to run Windows Update to apply more updates available for Windows 10.

Microsoft has stated that the roll out plan of Windows 10 for the general public would be step-up scaling, where fewer gets it first, and more is getting it as days go by. Thus, do be patient and glad that you’re not “guinea pig” if your system doesn’t prompt you to install Windows 10 now, even though it may have completed the download of Windows 10 OS onto local disk.

While download of Windows 10 installation files may be completed ahead of official release date, but it won’t start the installation by running the accompanied setup.exe file. Instead, the following error is returned:

Anyway, if you can’t wait, you can always manually upgrade to Windows 10 through Windows 10 ISO images that floating on the Internet without waiting for Microsoft’s GWX push via Windows Update.

Note
You must perform in-place upgrade to Windows 10 from existing Windows 7 or Windows 8.1 systems at least once to record the device hardware ID with Microsoft, so that you can perform clean install or reset the system and remain permanently activated.