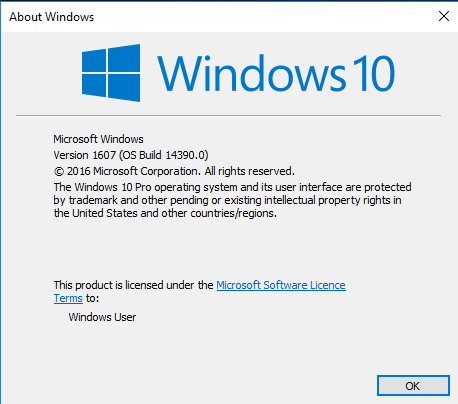 Similar to previous few recent builds, Windows 10 Build 14390 no longer has the pre-release agreement. In fact, all pre-release software features such as watermark, timetimb and license terms have been removed or replaced, making it harder to know which build is going to be the RTM (released to manufacturing). However, with official general availability date of Windows 10 Anniversary Update as August 2nd, 2016, the most recent build released has a high chance as potential RTM candidate.

According to Microsoft, only one new minor feature added in build 14390, that’s Amazon Assistant extension for Microsoft Edge (which already available on Windows Store for Windows 10 Build 14379 or higher)

Amazon Assistant: Amazon’s official browser extension is now available for Microsoft Edge! Amazon Assistant helps you make better decisions wherever you shop online by giving you access to Deal of the Day, Product Comparison, Wish List and Shortcuts to your favorite Amazon destinations. Check out all of the available extensions by launching Microsoft Edge, opening the “…”menu, selecting “Extensions” and then clicking “Get extensions from the Store”.

You should no longer see the error code 0x80004005 when enabling Developer Mode on the “For Developers” Settings page if your PC is using a non-EN-US language.

For Windows Insiders on the Fast ring, open the Settings app, then go to Update & security -> Windows Update -> Check for updates to download and install build 14390.