In addition to Media Creation Tool, Windows 10 Version 1511 (Build 10586) is no longer available from TechBench, pulled from Windows ADK (Assessment and Deployment Kit), SDK (Software Development Kit), WDK (Windows Driver Kit), Windows HLK (Hardware Lab Kit), Mobile Emulator, and possibly also from Windows Update. In fact, some users reported that Windows 10 Version 1511, 10586 no longer offered via Windows Update, and those who upgrading from Windows 7 or Windows 8.1 will get Windows 10 RTM Build 10240 too.

On the Windows 10 software download page, the text was changed to include the following line, which confirming that Windows 10 Build 10586 is no longer available from the page: 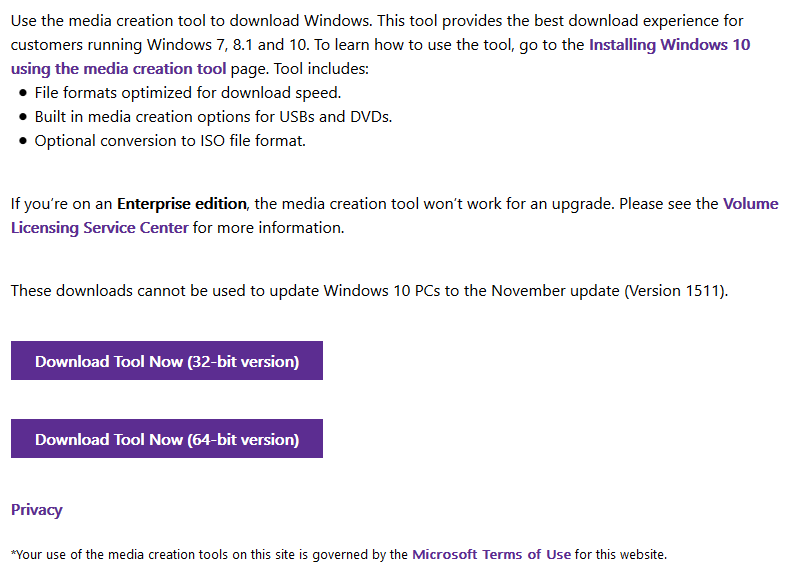 Microsoft has not pulled the Windows 10 November 10 update. The company is rolling out the November update over time – if you don’t see it in Windows Update, you will see it soon.

Apparently the pull back is for general public only. If you’re MSDN subscribers, you can still download the complete selection of original untouched and genuine Windows 10 Version 1511 ISO images from Subscriber Downloads. 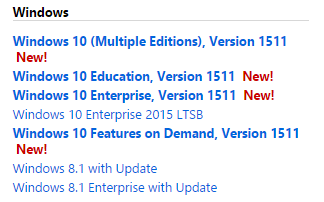 Here’s the information of some of the MSDN downloads:

Similar to ISO image created by Media Creation Tool (in fact they’re identical, including the ESD of same build delivered via Windows Update), if you manage to download a Windows 10 November Update (Version 1511) ISO from MSDN, you can also use it to perform in-place upgrade in addition to clean install, by mounting the ISO or burn it to DVD or USB flash drive, and then manually execute the setup.exe.

Update 2: Microsoft has restored access to Windows 10 November Update through various tools on Microsoft Download Center. Microsoft explained that the Windows 10 November Update was pulled due to a bug, where a few settings preferences may have inadvertently not been retained for advertising ID, Background apps, SmartScreen Filter, and Sync with devices. The bug is fixed by the update that accompanies KB3120677.