The version number of Windows 10 feature update codenamed Redstone 5 (RS5) is widely expected as Microsoft commits to biannual update to Windows 10, normally on March and September. The Windows 10 OS version number is typically derived from the year and month which it’s ready for consumption. As such, expect Windows 10 version 1809 RTM to be available for Windows Insiders in September 2018, and general public in October 2018. 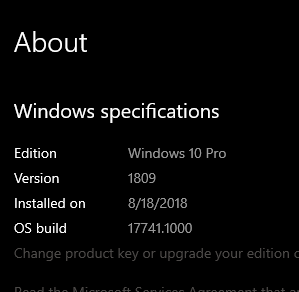 Windows 10 Version 1809 is likely to be the last of the five Windows releases that has the Redstone (RS) codename. The next feature update release, scheduled to be released in March/April 2019, is codenamed 19H1, switching to date-based system representing the arrival in the first half of 2019.

Windows 10 Build 17741 features mainly bug fixes and under the hood improvements, with the only major visible change being Your Phone app shortcut prominently displayed as desktop pin.

To receive and download Windows 10 Build 17741, join Windows Insider program and set to receive update in the Fast ring.