When attempting to connect or add a network printer or shared printer (both printer on print server or shared via PC) in Windows operating system, including Windows 10, Windows 8 and Windows 7, the addition of printer failed with the following error message:

Windows cannot connect to the printer.

When clicking “More details”, it shows “Operation failed with the error 0x000003eb”. 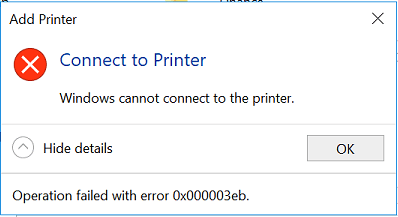 There problem continues to happen even though you have deleted and removed any existing printers, and ensure that all the printer ports are deleted. However, when the printer is connected to the computer via USB cable or connect directly via IP address, the printer can be added properly and works fine.

The problem happens likely due to corruption or misconfiguration of printer drivers. To resolve the issue, try the following steps:

If the above method does not solve the issue, try the following registry trick instead (BACKUP the registry key by right click on the subkey and choose “Export” before modifying):

Note
To stop and start the Print Spooler service, you can also open an Admin Command Prompt, and run the followng command: