Windows DreamScene preview allows Vista Ultimate users to set and play MPG or WMV movie files as an animated desktop wallpaper, commonly called motion desktop. The beta version of Windows DreamScene has actually leaked on the P2P networks for a while, so the official release from Microsoft by Windows Update (WU) is kind of for those who afraid about the authenticity of leaked version.

Windows DreamScene can be downloaded via Windows Update.

Once installed, you can enable DreamScene through the Desktop Background section of Personalization. 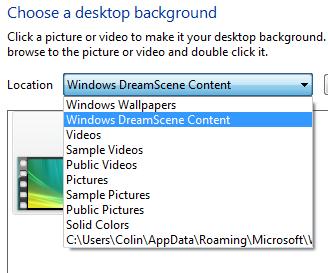 After Windows DreamScene is enabled, you can actually just right-click a video file of the supported type or format (MPG and WMV) and set it as your desktop background with DreamScene.

Right click on your motion desktop and choose “Pause DreamScene” or “Play DreamScene” to stop and continue playing the animated wallpaper.