This system does not support fullscreen mode. Choose “Close” to terminate the application.

The lack of support for full screen DOS Command Prompt in Windows Vista, Windows 7, Windows 8 and Windows 8.1 is a big annoyance especially for those who still playing games for DOS and Windows 3.1/9x era, use legacy software such as WPDOS or programmers who frequently switch to command prompt to use DOS based programming language such as PASCAL. It happens because in these OSes, the Windows Display Driver Model (WDDM) based device driver for the graphics card does not support the running of DOS video modes.

Workaround 1: Use XDDM driver instead of WDDM driver for video graphics adapter

Note: This solution has been recommended by Microsoft in KB926657.

To install a Windows XP video driver under Vista, just follow the procedure listed in the guide below. The steps should work for both NVIDIA and AMD ATI video graphics accelerator card.

Once computer rebooted, you should be able to open programs or command prompt shell in full screen window. You may need to set the resolution again, as everything related to display settings is likely to be reset.

If you want to reverse this procedure and install back the video display card’s manufacturer driver, follow the same instructions again, but choose the option to let Windows automatically install the appropriate software for your system instead of browsing your computer for driver software. If you unable to do so by clicking on Properties button on Adapter tab, go to Device Manager and directly select Update Driver Software on right click context menu.

DOSBox is a Intel x86 and DOS emulator for Windows. The open source DOSBox application runs up a shell window which emulates a DOS environment complete with sound, graphics, mouse, modem, etc., and allows legacy DOS apps and games to be ran and play on it. DOSBox handles all requests between Windows and the DOS window, memory allocation, control CPU speed, and allow tweaking of sound card emulation, graphics type, key mapping, mouse sensitivity, resolution, full screen mode and etc.

Although DOSBox cannot add Windows features to DOS programs that are run on DOS systems, and some features of DOS in native mode are not present, but its usefulness is still great in allowing almost all currently-available 32-bit versions of Microsoft Windows – Windows 95, 95b, 98, 98SE, ME, NT4, XP, 2000, 2003, Vista and 2008 to run legacy apps and games. 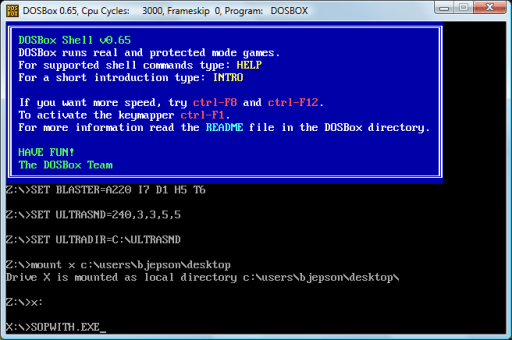 Some tweaks and configuration have to be done in order to get DOSBox running to play your games or launch your old application software. Basic Setup and Installation of DosBox wiki provides a guide on how to use the DOSBox. As DOSBox emulates DOS, you will have to deal with lots of command line syntaxes in command shell. If you’re not familiar with command prompt, there are a few GUI frontend interface for DOSBox, which presents all settings in typical Windows interface, and allows users to attach different profiles with different configuration optimal for different DOS games or programs. Such front ends include (no longer available), (no longer available) and DBGL: DOSBox Game Launcher

Note that while using DOSBox, it’s best to disable User Account Control to get the best performance and so that DOSBox can properly emulates sound, VGA color and CPU speed. During the DOS era there is simply not such thing as functionality restriction based on user account and user level, thus any limitation may cause problem to emulated apps.

Another issue is Windows Sticky Keys, an accessibility features for physically-handicapped users. Sticky Keys are activated by pressing a particular sequence or combination of keys which a normal user seldom and unlikely stumble across, such as pressing Shift key 5 times continuously. But these sequence of key pressing may be needed during DOS gameplay. Worse is that DOSBox doesn’t handle this properly and it doesn’t partition keyboard or mouse activity away from the host OS. So you properly need to disable Sticky Keys permanently so that it won’t suddenly appear and disrupt game play.

Again, using DosBOX and/or its front-end GUI may also caused some apps or games to suffer from abnormal behavior such as system randomly crashes or refuses to run altogether.